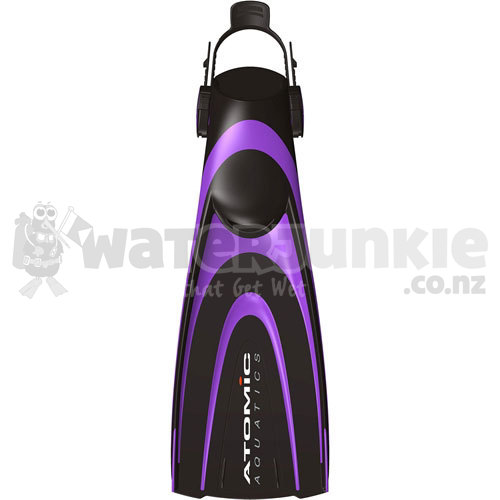 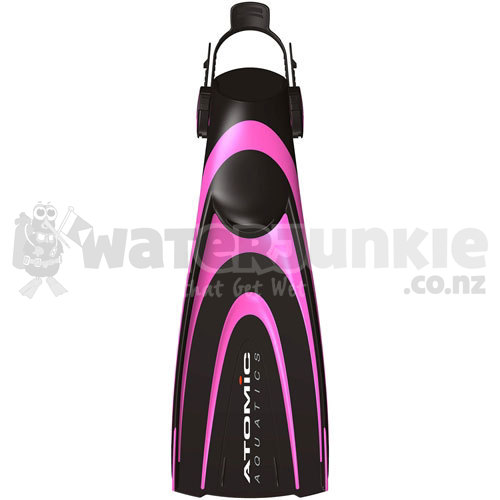 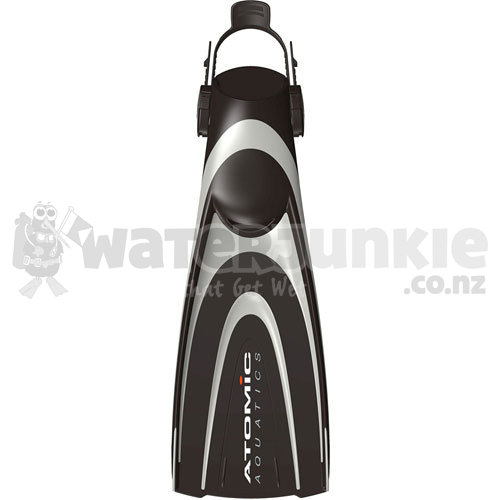 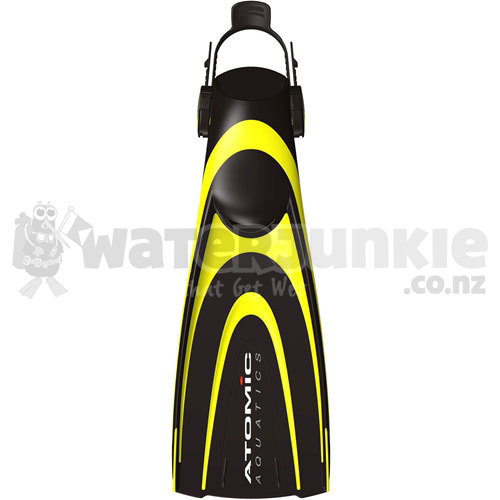 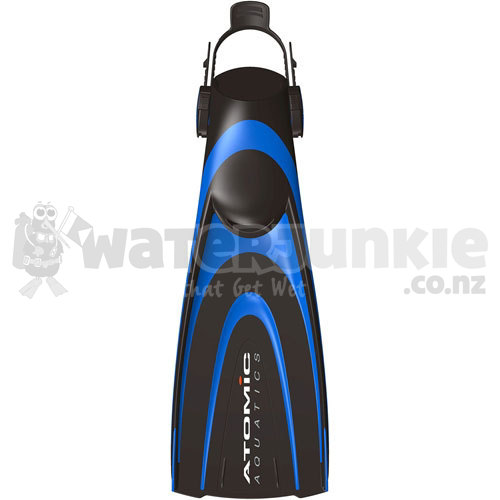 The Atomic Blade Fin combines 2-Fame Designs on One-Fin to Maximize Kicking Power in the Water. Atomic has achieved this with POWER-LOOP MONOCOQUE STRUCTURAL ENGINEERING MONOCOQUE and POWER RAILS . Power-Loop Monocoque, is an Engineering-Term meaning Single Shell." This design structure is Heavily Utilized in the design of an Aircraft Fuselage or Indy Race Car, for example. Power-Loop Monocoque is a Construction Technique that Utilizes the External Skin to Support Some-or-Most of the Load-Area of the Fin while Power is applied through the Frame Rails (Power Rails) into the water.

POWER-LOOP MONOCOQUE FOOT POCKET POWER PLATE The Power-Loop Monocoque Structure is Located Over-the-Top of the Foot-Pocket and connected to the Fin via a Frame Rail (or Backbone/Bulkhead), Backbone Frame Structure Inside-the-Power Rails. In turn, this structure is connected to the sole plate (Power Plate), giving the diver a Very-Solid-Feeling of the Fin being Bolted" to the Foot as Power is Smoothly-Transferred to the water without Twisting. POWER RAIL The Frame Rail Structure-on-Each-Side of the Fin is designed to Mimic a Bulkhead, Backbone or Spine. VERTICAL STABILIZERS Oversized Vertical Stabilizers at the Tips keep the Fin Tracking Straight Up-and-Down. THE FOUR C'S OF ATOMIC THRUSTER FIN POWER: CAPTURE CONTAIN CHANNEL CONTROL Thruster Fins Capture Water and Contain the Flow without Spilling it Over-the-Edges while Channeling the Flow of Water Down-the-Blade and Off-the-Vertical Stabilizer Edge Tips, and Controlling the Power with Atomics' two Frame Structures (Monocoque and Frame Rail) to Fully Optimize the Paddle Fin Design.

Wow! Is what you will say once you have tried these Fins, but that's not all! The Atomic Aquatics Non-Vented Blade Fins have a NEW BUCKLE STYLING All new Buckle Style with Wicked" design and Cleaner Styling. Fin is equipped with EZ-LOK Squeeze-Style" Quick-Release Buckles which Snap-On-and-Off with Ease, yet Will-Not Disengage- Accidentally. The Rubber Fin Straps are equipped with a Large Pull-Tab for Easy Donning and Doffing. Fins are available in Multiple Colors and Sizes and are covered by a 12 month limited warranty.